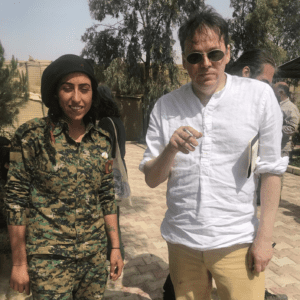 David Graeber is an American anthropologist, anarchist activist and author known for his 2011 Debt: The First 5000 Years, 2015 The Utopia of Rules and 2018 Bullshit Jobs: A Theory. He is a professor of anthropology at the London School of Economics.

"Oh, and since this is a matter of some historical contention: no, I didn’t personally come up with the slogan “We are the 99%.” I did first suggest that we call ourselves the 99%. Then two Spanish indignados and a Greek anarchist added the “we” and later a food-not-bombs veteran put the “are” between them. And they say you can’t create something worthwhile by committee!  I’d include their names but considering the way Police Intelligence has been coming after early OWS organisers, maybe it would be better not to."