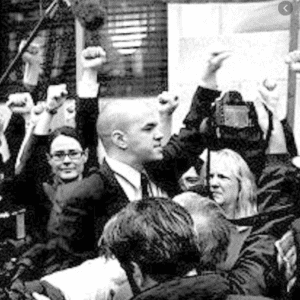 Tim DeChristopher disrupted an illegitimate Bureau of Land Management oil and gas auction in December of 2008, by posing as Bidder 70 and outbidding oil companies for parcels around Arches and Canyon Lands National Park\ in Utah.For his act of civil disobedience, DeChristopher was sentenced to two years in federal prison. Held for a total of 21 months, his imprisonment earned him an international media presence as an activist and political prisoner of the United States government. He has used this as a platform to spread the urgency of the climate crisis and the need for bold, confrontational action in order to create a just and healthy world. Tim used his prosecution as an opportunity to organize the climate justice organization Peaceful Uprising in Salt Lake City, and most recently founded the Climate Disobedience Center.