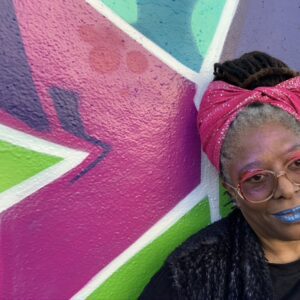 In the very early morning of March 11, 1960 at 1:07am, Barbara Robin Lee was born to a 16-year-old black teenager at Pilgrim State Mental Hospital on Long Island, NY. Barbara grew up to be a madcap, nappy-headed tomboy who read comic books and listened to Elton John. In her young adulthood, she got politicized first by campaigning for Gary Hart the first time around, and then she discovered anarchism when she became homeless and squatted in the Lower East Side. Barb has spent a lot of time in the NYC and New Jersey jails for protesting in the streets of NYC, in Tompkins Square Park, and fighting white supremacists at Giants Stadium.

Nowadays, Barbara dyes her gray hairs and still thinks she's a teenager. She loves her two cats and is a friend to all animals. She sings soprano in the choir and she thanks Rev. Billy for saving her from political apathy. Oh yeah -- when the mood hits her, she unleashes her furious talent of the written word to all whom will read and listen. Lester Bangs, Assata Shakur and Dr. Hunter S. Thompson are her heroes. She was Singer of the Month in 2012.