We are a radical performance community based in New York City, we come to the Choir from many different creative and activist backgrounds. We have evolved a very particular sound and performance experience from the synthesis of our lived experience. We are grounded in the work of Justice and in service to the Earth. We love to Sing together. 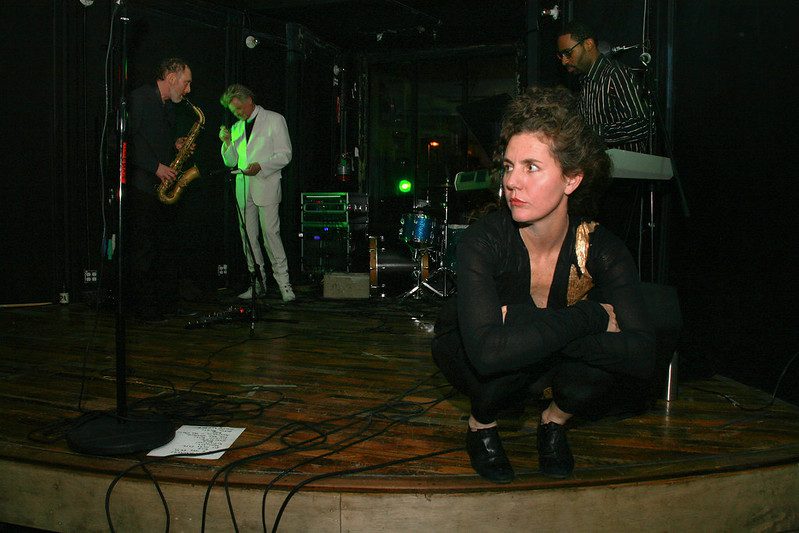 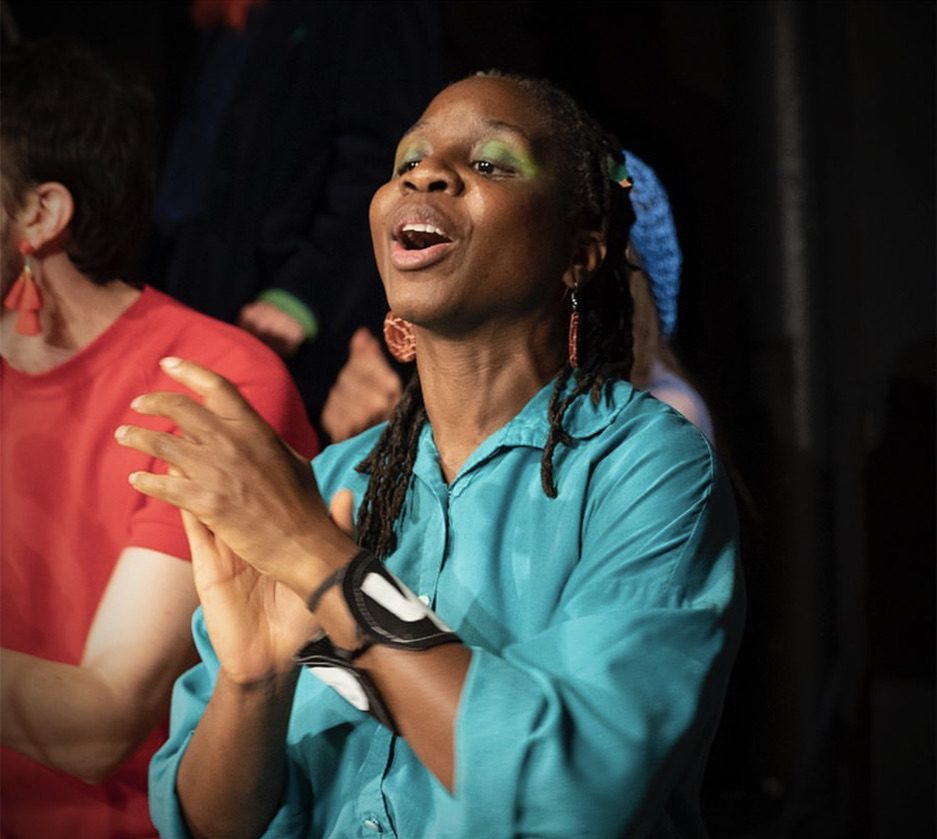 Singer of the Month 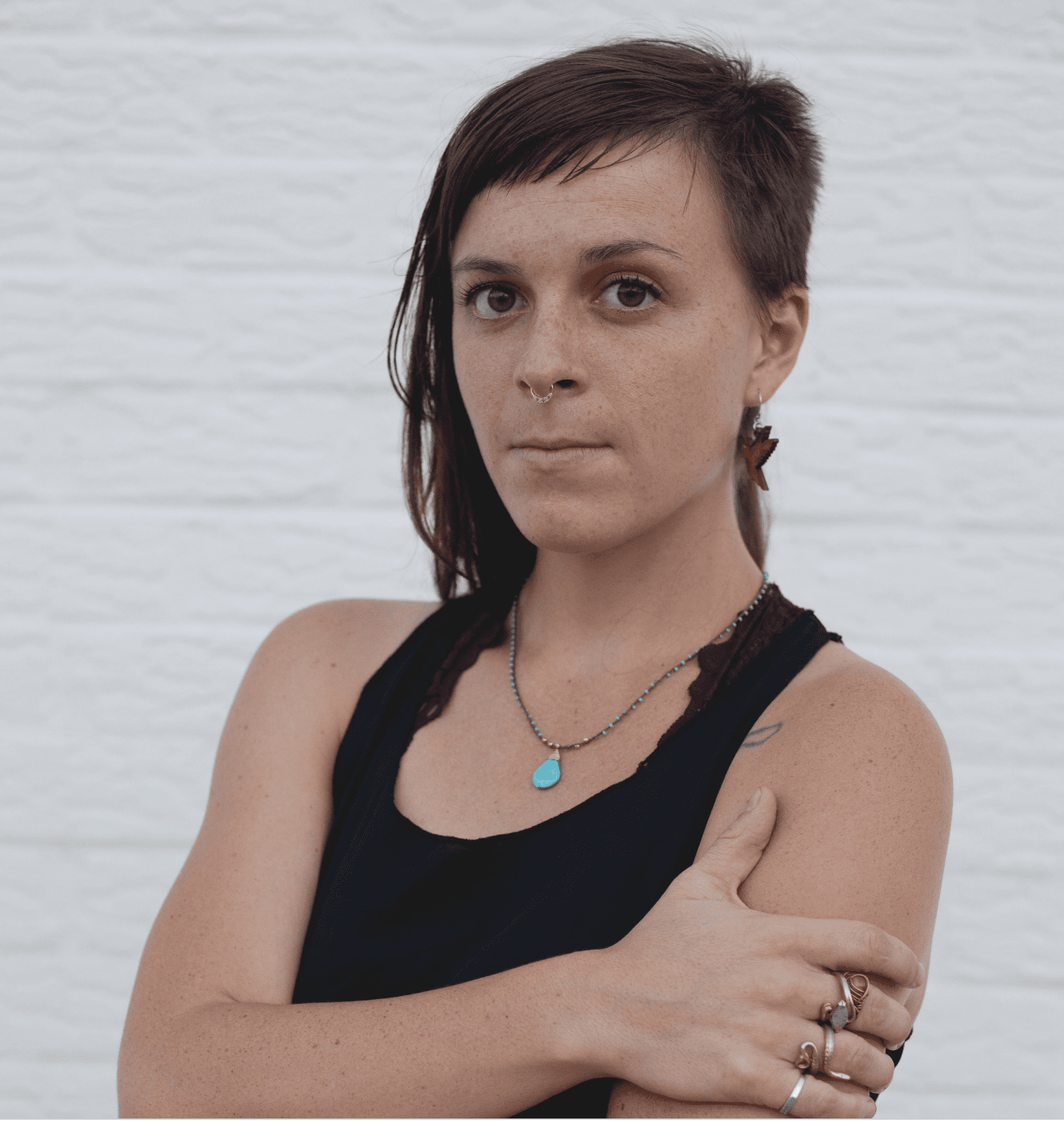 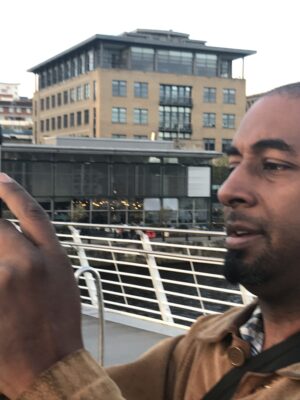 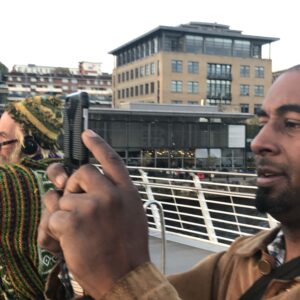 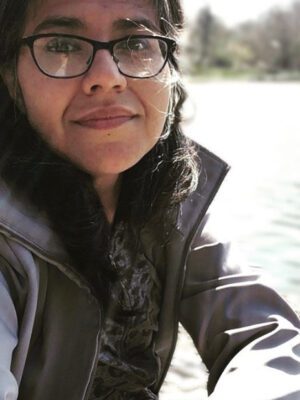 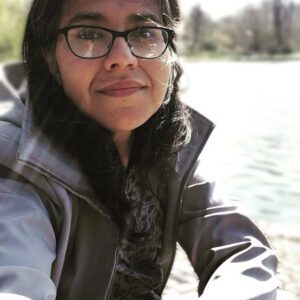 Hi I’m Eva “Evita”  Jimenez and I’m an alto in the choir. I was born and raised in El Paso, Texas.  Since I left home I have lived in Dallas, Oklahoma City,  Missouri, Oregon and finally blended up in New York.  I’ve been in New York for nine years and lived in every borough except Queens.  I guess I have a bit of nomadic lifestyle but maybe one day I’ll settle down.  The choir is like family to me and I find so much inspiration from them. 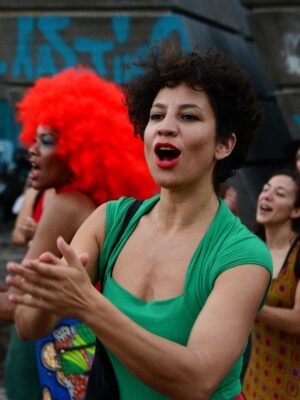 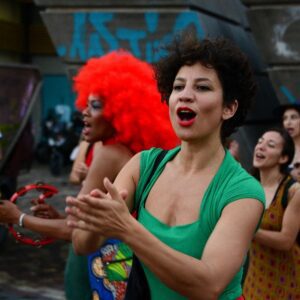 Fran is an artist with a queer eye for change. She lives in New York City with her lover Garret. She puts a lot of her time into art projects and being a good singer, as well as going to more than half of the actions in the city, with various groups such as the Coalition to Protect Chinatown & Lower East Side, stopping the tall towers that were going to be put into Chinatown! She joined the Stop Shopping Choir in 2017, now she is singing with us to 2020! We all love her very much and would do anything to hear her sing in Spanish. We should also respect that she is a very well fit woman. She also has the “best dresser award” in the choir and won 2nd places in “the goth challenge”. She is from an amazing Chilean community, we love her very much and wish a great life ahead of her. 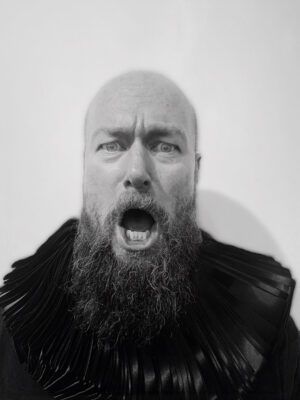 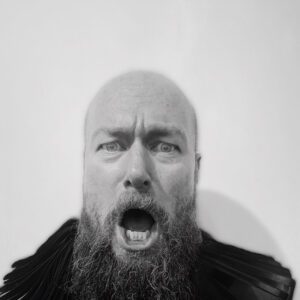 Gaylen is from the Colorado. He is good with his hands. He has two sons, Angus and Honcho and most other kids really like him. He is a cyclist and plays guitar. As Lyn once said, We like Gaylen, he has tools AND brains. 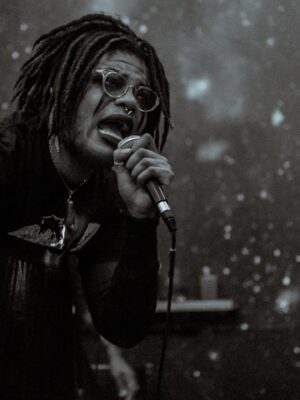 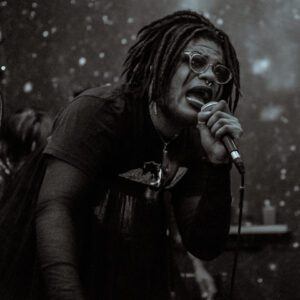 Graham KG Garlington is a trans non-binary singer-songwriter, activist, experimental musical theatre composer, and drag artist. He’s been assistant directing off-Broadway (Till, NYMF, 2019; Only Human, 2019) since graduating Sarah Lawrence College in 2018. They are currently working on their third musical while working and performing with Reverend Billy and the Stop Shopping Choir. They look forward to a future where the police are abolished and the capitalist white supremacist state falls. 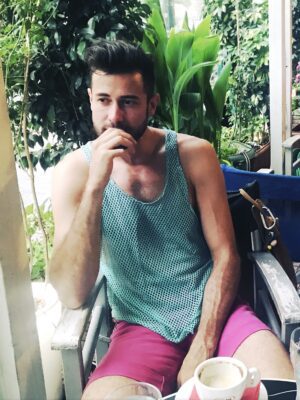 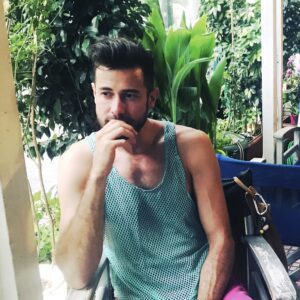 Gregory knows just what we need to have a good day.  if you see into him he is a VERY loving man. in fact, you don't have to look into him to see that he is a great person, with a great personality. Let's talk about how creative he is, one time he even made a purse for Lizzo on SNL but sadly she chose not to wear it. We all know that Gregory is an explorer with great taste for a great adventure. He is great at doing what he says he is going to do. All he needs is some support and he is unstoppable. We hope we give him the love he needs. 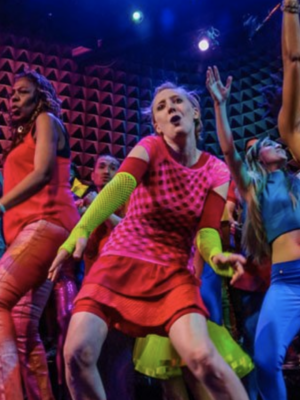 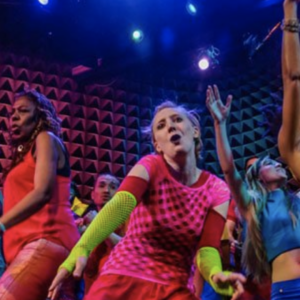 Jess Beck is a soprano, an enthusiasm junkie, a reader, writer, dreamer, practical thinker, and advocate of the oxford comma. You may know her as "the one who can't stop moving" on stage or "the one who probably left her water bottle/sweater/rain pants/brain" in the green room/at rehearsal/in the van.  When not preaching with the choir, she can be found making documentary films, resisting, loving, teaching, hugging, writing, bicycling, flirting, and as often as possible, laughing. 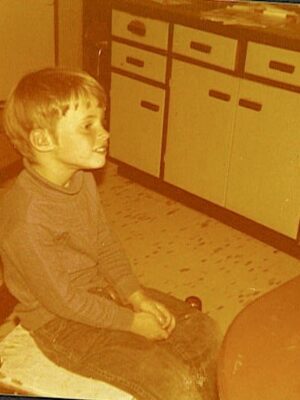 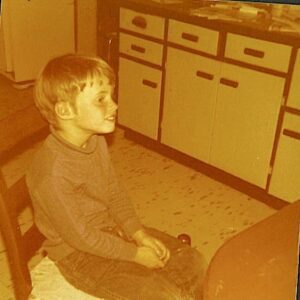 John Carlin is an actor, writer, musician, and activist who joined the Stop Shopping Choir in the fall of 2014. A native New Yorker, he is a former RCA recording artist who has shared stages with Radiohead, PJ Harvey, The Flaming Lips, among others. As a solo independent artist, TimeOutNY has called him “one of NYC’s better-kept secrets.” As an actor he has appeared on stages in NYC, LA, Washington DC, and at the Edinburgh Fringe Festival. The Choir’s resident baby whisperer, and a single dad himself, John loves campfires, horses, spinning records, and swimming naked whenever possible. 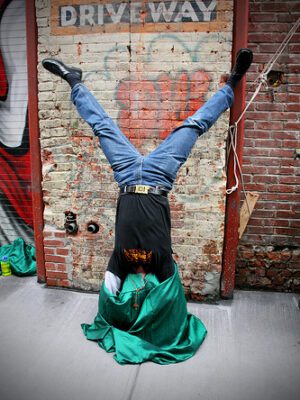 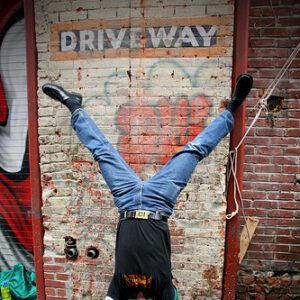 Founded in 2019 The Stop Shopping Choir Council is made up of elected choir members chosen to take care of the choir at large. The council members rotate around every six months and like stewards of the land, they anticipate and tend to the choir’s needs, and instigate the community’s collective imagination. Self-determined and evolving, the council just wants to help.

DO YOU WANT TO JOIN THE CHOIR?

We rehearse on Sunday evenings. Please join us for a full rehearsal and we can, together, see if it is a good fit. We have many levels of singers, from Broadway belters and classically trained to karoake and secret shower crooners. Site reading and the ability to read music are not necessary!  Check out our music.

The Church of Stop Shopping is intent on creating a safe and vibrant environment, one that encourages creativity, courageous activism and community consciousness.

We consider each other’s feelings and comfort levels.

We treat each other with respect and do our best to understand each other’s differences.

We encourage interpersonal complexity, lets be involved in each other’s lives! 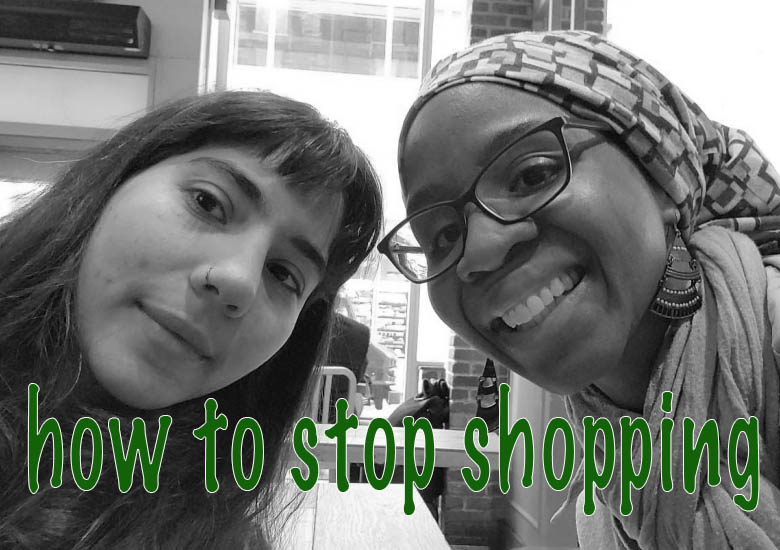 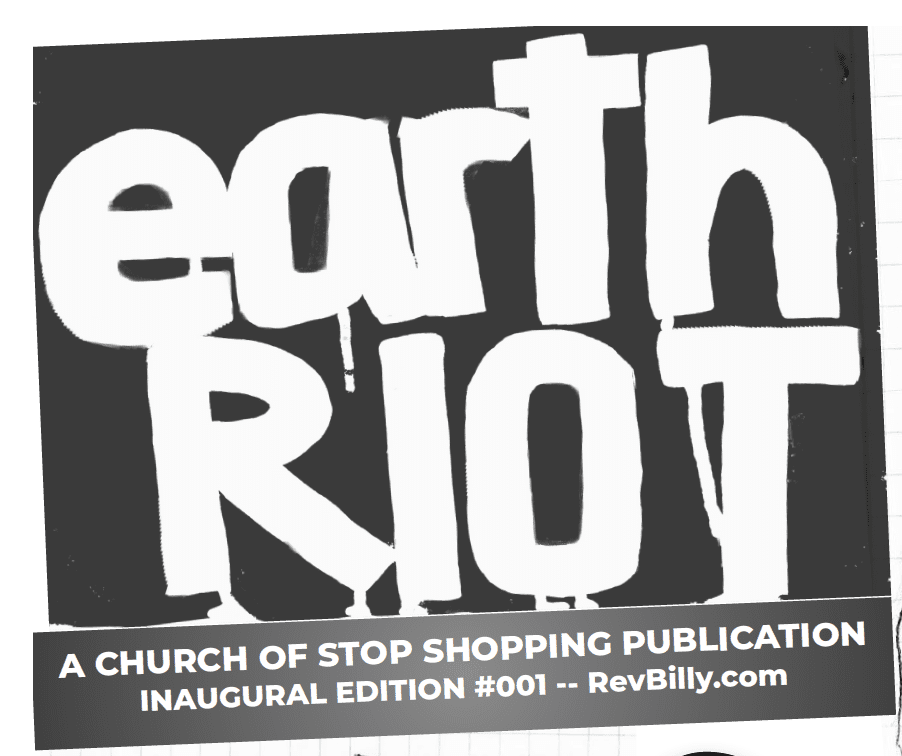 ZINE Issue 1 DOWN UNDER/NOLA by Dragonfly 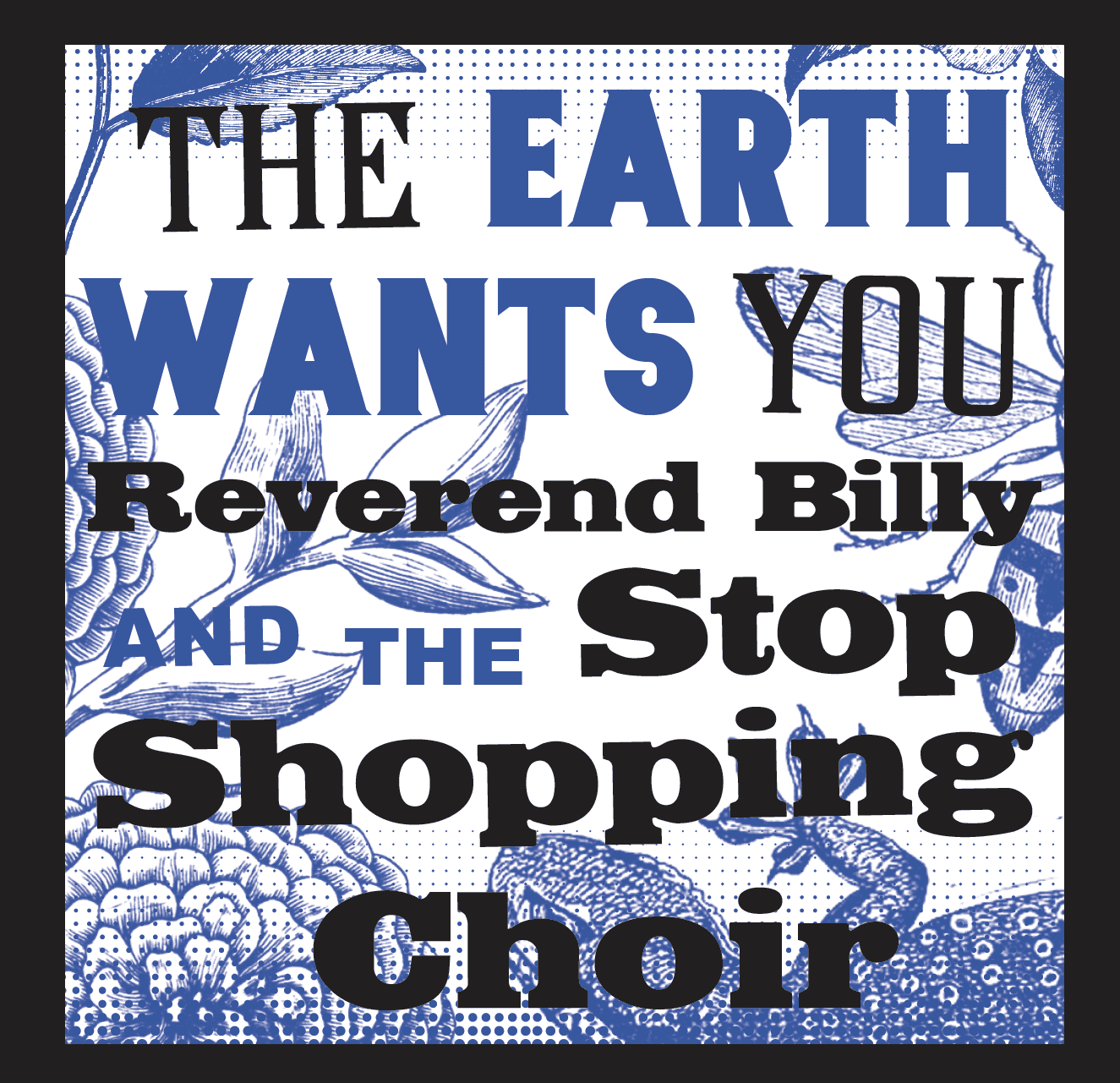 CHOIR IN THE WORLD

Ashni is a healer

Katy is a Healer

MORE WORK BY THE CHOIR

SINGERS OF THE MONTHS

We have a small emergency fund which is available for the choir, usually grants and loans of 250$ or less. This is one way we help eachother  through rough patches as many of us live paycheck to paycheck. Would you like to CONTRIBUTE to the Choir Emergency Fund?

ART BY THE CHOIR 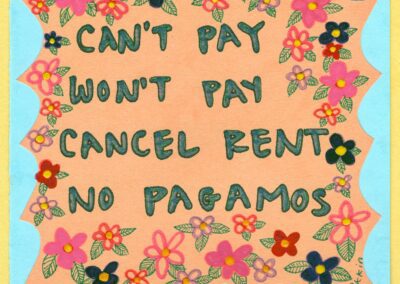 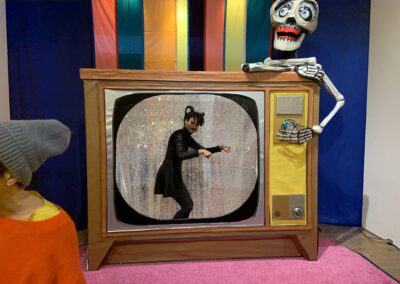 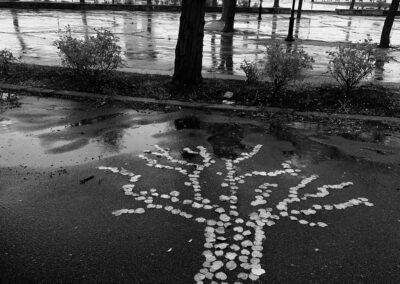 MORE ART BY THE CHOIR

WE MISS YOU ON THIS EARTH