Occupy Wall Street re-birthed the radical landscape in New York,  though it only lasted a few months. OWS was a turning point for NYC activism and altered the  organizing landscape. Some groups disappeared and others were born. A progressive agenda was launched from the General Assemblies of Zuccotti Park that can still be felt in the campaigns and rhetoric of people like Bernie Sanders, Elizabeth Warren and Alexandria Ocasio-Cortes.  After the OWS encampment was evicted Billy toured twenty-six Occupy Camps, from Oakland to Zurich.

The Church of Stop Shopping worked more independently after OWS. The annual “Buy Nothing Day”, a stand-off with thousands of rabid consumers at Macy’s pre-dawn doorbuster ritual on Black Friday – was replaced with specific issues that generated from over-consumption: Saving the honeybee, stopping mountain removal coal-mining (MTR), banning Monsanto’s glyphosate, forcing divestment by the big banks from fossil fuel financing.  The Church concentrated on the Earth, the problem of extinction and extraction and Climate Change. The Stop Shoppers began working in bank lobbies in 2007, but returned in earnest in 2010 to draw attention to Mountain Top Removal and environmental injustice in Appalachia.

The Church’s early actions (sometimes in coalition with groups like, Forest Ethics, Rainforest Action Network and the Earth Quakers) in bank lobbies resulted in numerous victories and withdrawals of banks from MTR. Their perfromance tactics lent a new vocabulary to the movement against fossil fuel financing, especially by JPMorgan Chase. In 2011, the Church started a project around extinction and climate change, wearing large orange puppet heads of the long-extinct Golden Toad and made appearances in climate damaging banks, Chase, HSBC, UBS, Bank of America and Citibank. The activists also began working against the chemical mono-culture in 2015 and its impact on Honeybees. The Church invaded the Robo Bee Lab at Harvard, which became the subject of a New Yorker feature by Elizbeth Colbert. In 2016 the Stop Shopping Choir opened for Neil Young and Promise of the Real in the Rebel Content Tour on the West Coast and New York.  Neil Young joined Kurt Vonnegut and Joan Baez in sharing the stage with Reverend Billy and the Stop Shopping Choir.

COSS continued to bring its resources to large scale community driven movements. The singers worked (and work) continuously for racial justice.  During the first wave of Black Lives Matter after Michael Browns’s murder  the Church went to Ferguson twice. Once during the Thanksgiving holiday, when their plans to serve an organic meal at the headquarters of Monsanto   Dragonfly sparked a national conversation on race, generating 11m hits on the website of the Church when she hugged a Ferguson riot cop who, in a grandfatherly way, hugged her back. Billy was arrested twice while preaching at BLM events.

The Choir also journeyed to Standing Rock in 2016, joining the extraordinary gathering of direct ation and prayer along the Cannonball River, led by 300 tribes. It was a life changing experience for the choir, confirming a long held belief that there is a post-religious spiritual path to Earth Justice. The Church redoubled its commitment to the Earth after Standing Rock. The election of Donald trump in 2016 changed the course of radical progress, many gains seemed to vanish in thin air. Activists were suddenly fighting for the most basic things on every front. Savitri D began leading writing rituals in Trump Tower, hosting gatherings there with 350.org and Students Against Climate Change. The Public Space terrace was finally closed after almost a year of of lunchtime writing which was always surrounded by scores of police and presidential security officials. In 2018 COSS began to work closely on  immigrant defense,  creating the popular “Bikes Against Deportation”, blocking ICE at the Varick Street Detention Center, and contributing creative resources to actions and events.  The choir sang in churches and synagogues to people in Sanctuary around the northeast and a great deal of music and media in performances all over the city.

In 2019 The Church of Stop Shopping began developing low risk, highly accesible actions that are easily replicable at Radical Lunch. They also worked to stop, delay or halt construction of the Cricket Valley Energy Center outside of New York City and helped build  blockade that shut down the plant for an entire day. 20 people were arrested.

Between September 2019 and march 2020 The Church of Sotp Shopping invaded 27 separate Chase Banks. On March 16 Governoor Cuomo issued a stay at home order and operations ceased.  On April 5th a small crew staged an action at the  Samartians Purse Field Hospital in Central Park which is run by a right wing Christian hate grouprun by Frankling Gramah Jr. Reverend Billy was arrested and held overnight–in the following weeks COSS worked with The Reclaim Pride Coalition to drive the homophobic group out of NYC.

On May 25  George Floyd was murdered by Derrick Chaubin and the Minneapolis Police Department, his death sparked an internaitonal movement agaisnt polic brutality and systemic racism. COSS has been on the street almost everyday since. On June 28th COSS participated in the Reclaim Pride Coalitions Queer Liberation 4 Black Liberation parade/march. They created  a lifesize and photo realistic effigy of legendary power sister Marsh P Johnson and a massive ritual elevating Trans Black Lives.

Reverend Billy Talen began preaching the message of a life beyond consumerism in Times Square in 1999. Early performances took place with a small pick up choir at Dixon Place, Collective Unconscious, St. Clements Playhouse and Charas El Bohio. A larger choir and congregation emerged from the wave of creative resistance accompanying the Anti-Globalization Movement. In NYC this movement took place largely in the streets and community gardens of the Lower East Side &  East Village. Reverend Billy led a number of sweatshop activists in the Disney Store interventions in Times Square while also exploring the defense of the culture of 42 nd Street from the invasion of national chains. Rudolf Guilliani’s demonization of street life and small traditional shops, and Disney, led the “clean up”. opposition to encroaching mono-culture would remain an underlying theme of The Church’s activism throughout the next 20 years.

After 9/11, The Church of Stop Shopping was among the first groups to resume live performance and hosted a series of shows featuring the Welfare Poets, passionately political musicians from Spanish Harlem. As the Church of Stop Shopping also returned to the streets, the intense militarization and security lockdown of the city resulted in continuing arrests for Billy and singers in the choir. The invasions of Afghanistan, Iraq and Bush’s “War on Terror” (all of which continue to this day) worked in parallel with police violence in the city and a remarkable influx of corporate mono-culture. In 2001, Billy met Savitri D, who took the directing reigns from Tony Torn for the stage performances of The Church. The troupe invented new stages inside the city, such as singing and preaching on rooftops around Washington Square while defending the Poe House. The Stop Shopping Choir’s cycle of concert stage church service musical plays, and public space actions were founded by Billy and Savitri D in the 2002 and 2003 period.

In 2003 COSS was invited by Burning Man founder Larry Harvey to perform on a Broadway size stage in the base of The Man. The series of performances with the 40 voice choir marked the blending of the activist and artistic presentation. Savitri D calls it the birth of the Stop Shopping Choir as it is known today. Soon, Rev and the Choir embarked on a series of tours in California and the Northeast and began performing at festivals in Europe and the UK. When the 2004 the Republican National Convention came to Madison Square Garden in NYC,  The Church was prominent in the large scale protests at the RNC. At Ground Zero they performed the First Amendment “cell phone opera” for 43 weeks straight and hosted a massive convergence at St. Marks Church in the Bowery. Billy and Savitri were active in the  radical bicyclist Critical Mass movement as hundreds of cyclists were arrested by the NYPD across a four day period. This was widely recognized as a turning point in radical activism in NYC, when many people abandoned the street and protest generally, with the rising police violence.

In 2007 Morgan Spurlock and Rob VanAlkamede completed the documentary “What Would Jesus Buy?” which played on 75 screens across the country and premiered  at South-by-Southwest. The Church of Stop Shopping appeared in regular rotations with national media, especially at Buy Nothing Day as Christmas approached. The anti-consumerism message evolved toward environmental activism. The Church joined Forest Ethics and began an ultimately successful campaign against Victoria’s Secret catalogue, which were sourced from clear-cutting of The Boreal Forest. The Church of Stop Shopping continued its tradition of helping local groups resist invasive monoculture with parades against Starbucks, Walmart, and the Gap. The church was sometimes alone and undefended in the defense of neighborhood and human-scale Main Street retail. In 2008 Reverend Billy and Savitri D were King and Queen of the Coney Island Mermaid Parade, then threatened by Mayor Michael Bloomberg’s plans for hotels and chains which would destroy the beach culture of small shops and amusements with carny barkers. Savitri launched a mermaid-in-the-window hunger strike to draw attention to the destructive rezone. The Church has fought to reclaim many lost spaces in the city, particularly public space under threat from retail.  It fought a luxury restaurant on the north end of Union Square, and a seminal gathering place for radicals in NYC – the birth-place of the first Labor Day in 1882. In 2009 Reverend Billy announced his candidacy for mayor on the Green Party ticket, opposing Bloomberg and his corrupt third term. A wave of gentrifying rezones was underway across the city during this time in downtown Brooklyn, Williamsburg, Coney Island. Billy and Savitri were in downtown Manhattan on Sept 2017 2011 on the opening day of Occupy Wall Street, and Billy and the Choir became the ever-present church choir in Zuccotti Park, at one point simulcasting it’s freedom songs in both NYC and the Occupy tent city at St.Paul’s Cathedral in London.

2007 What Would Jesus Buy released internationally

2012 There’s a Mountain In My Lobby/ Mountain Top Removal 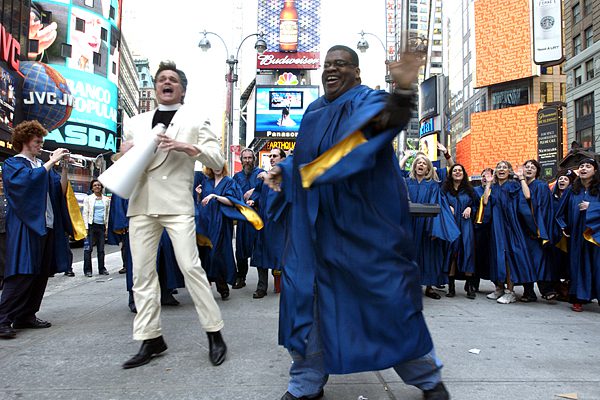 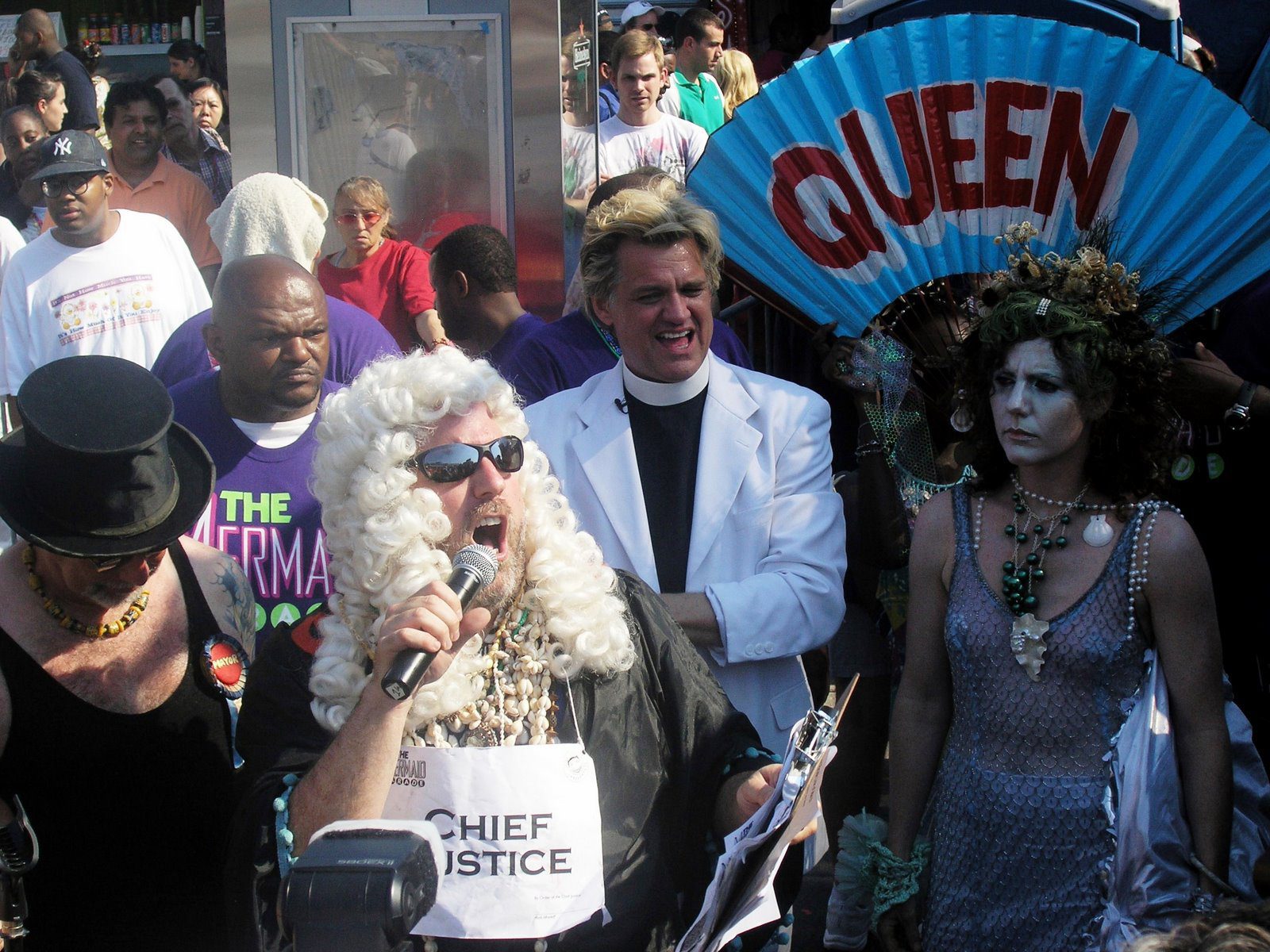 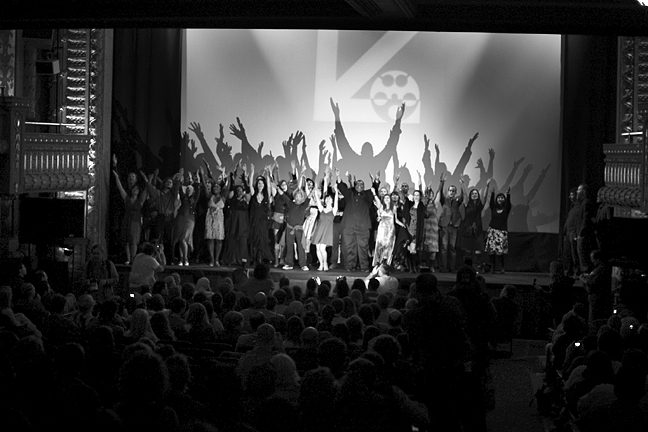 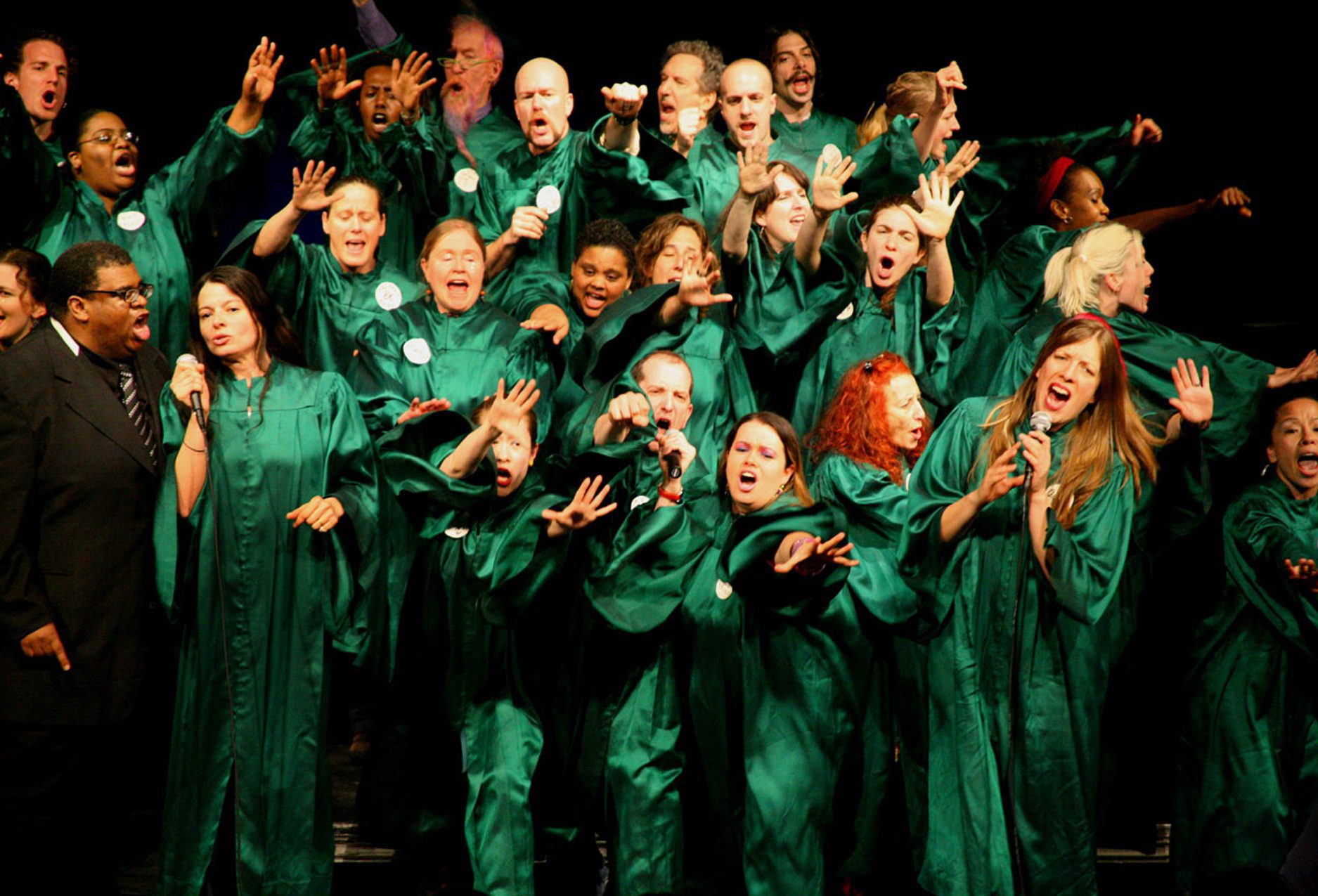 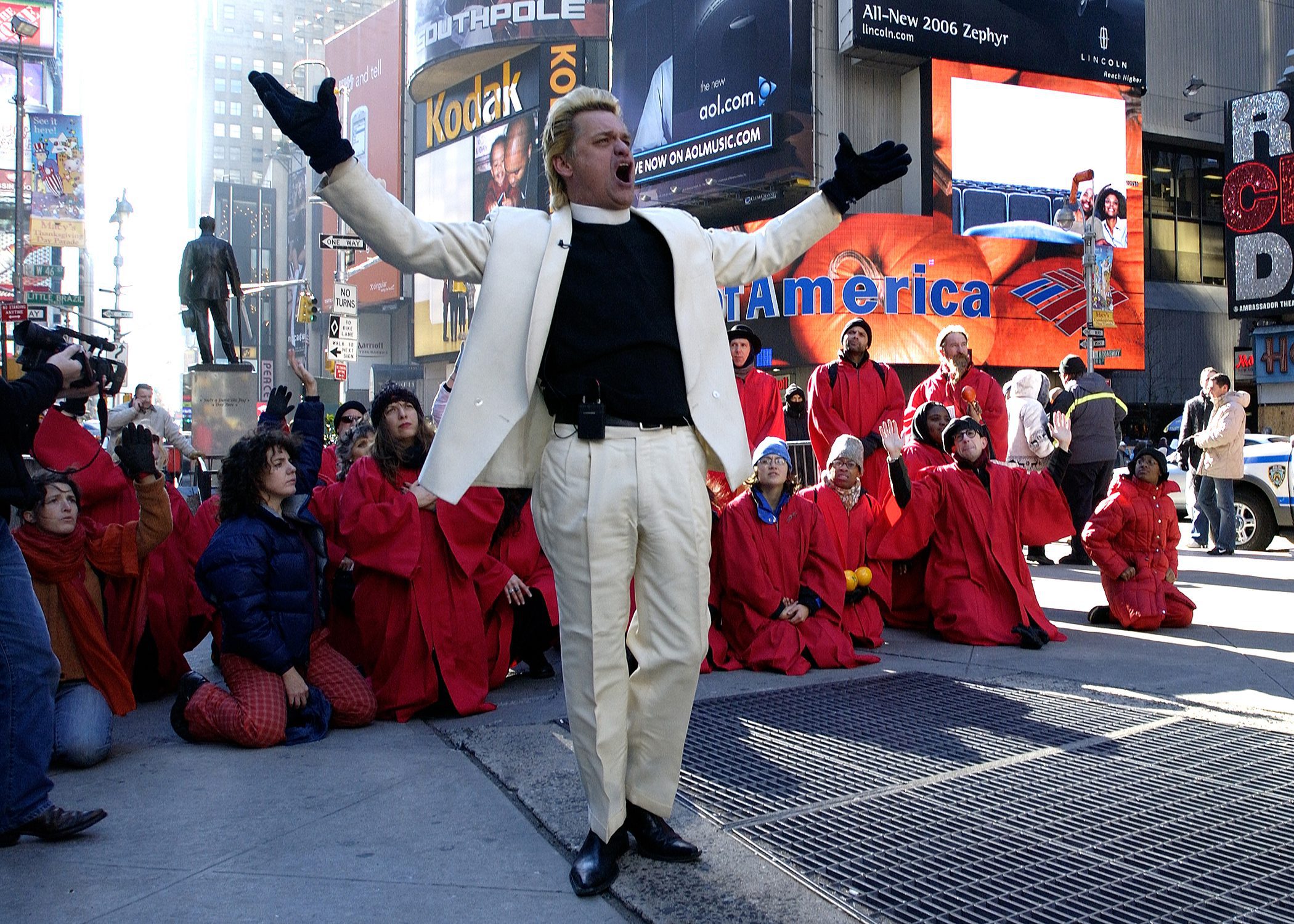 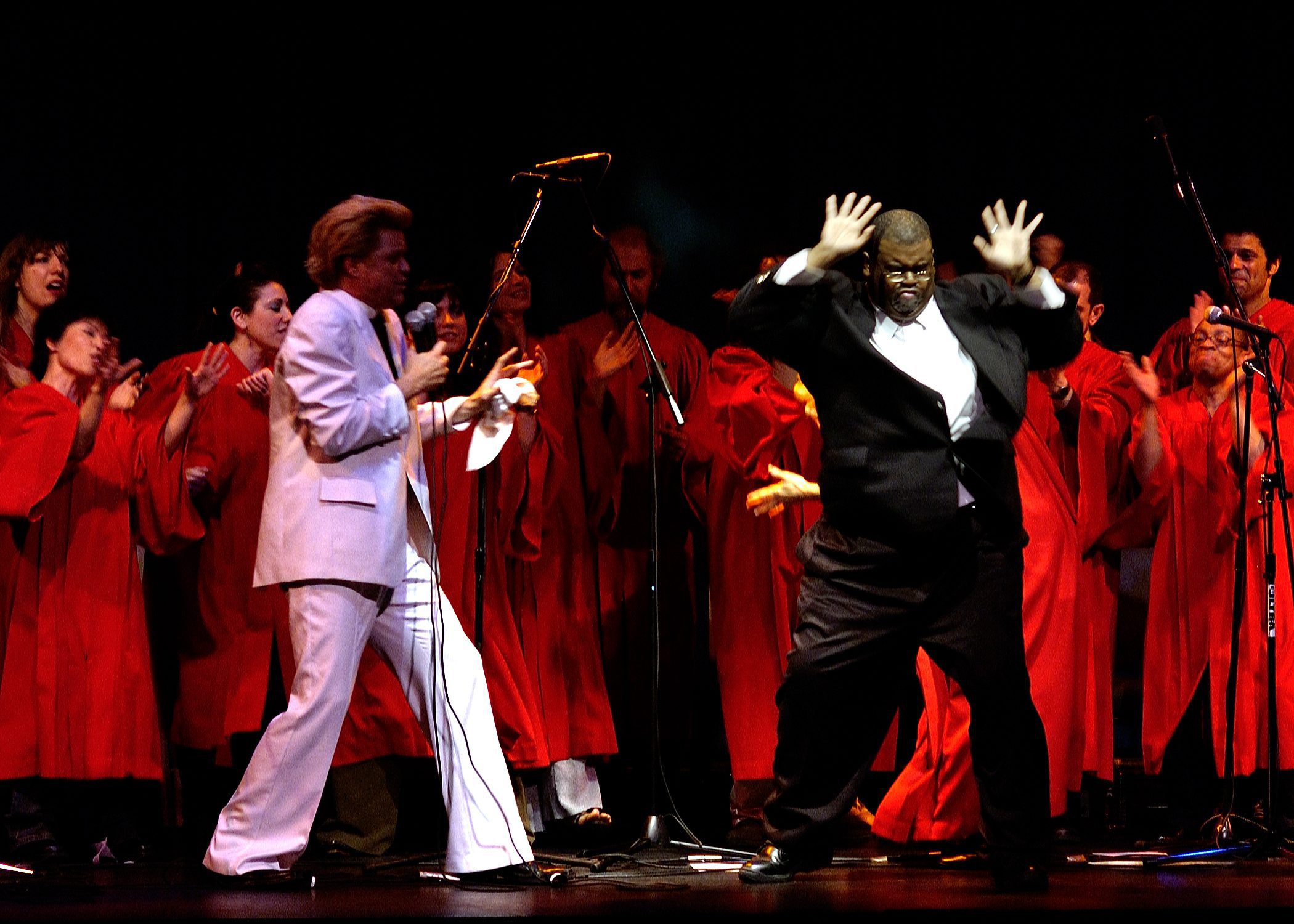 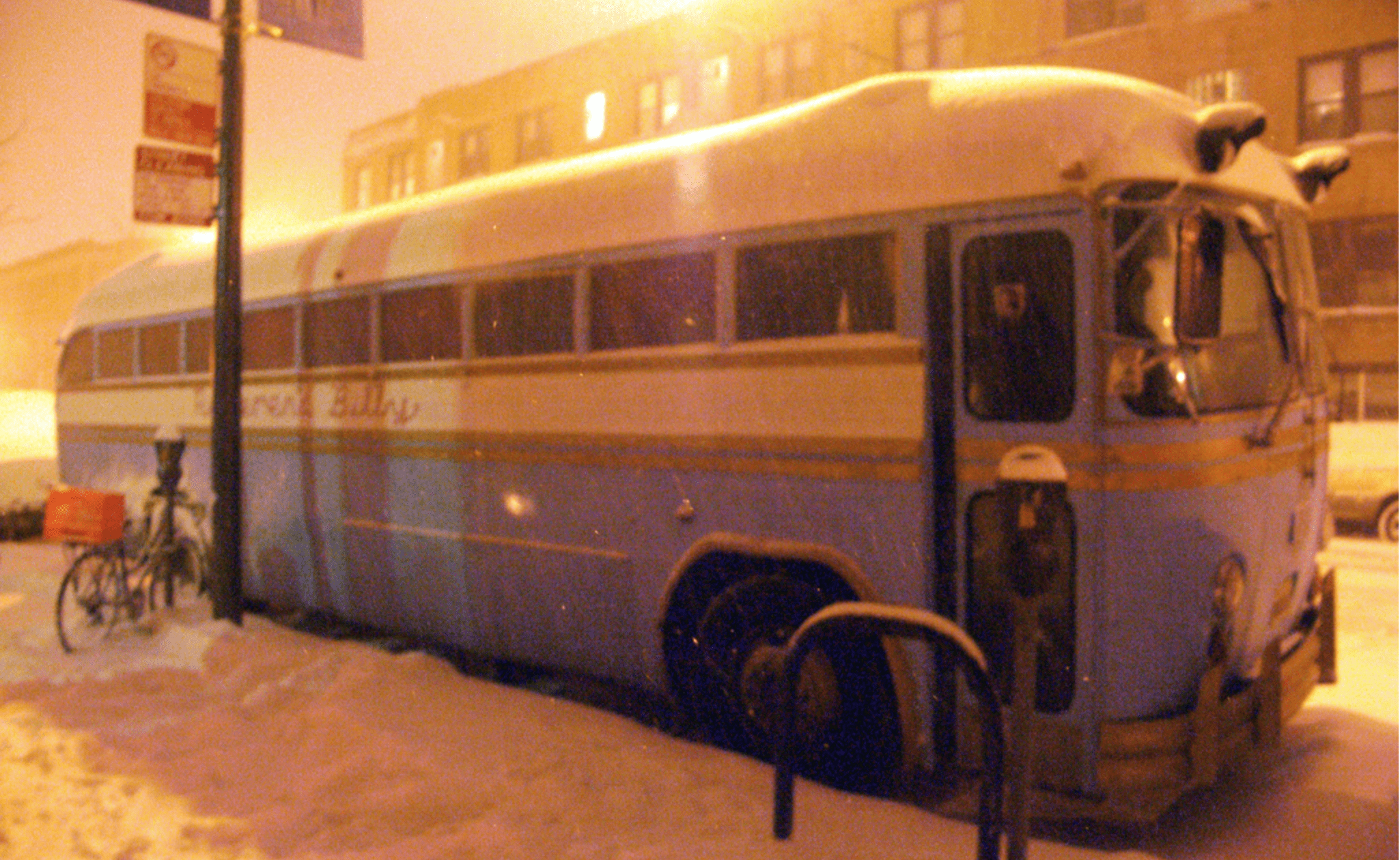 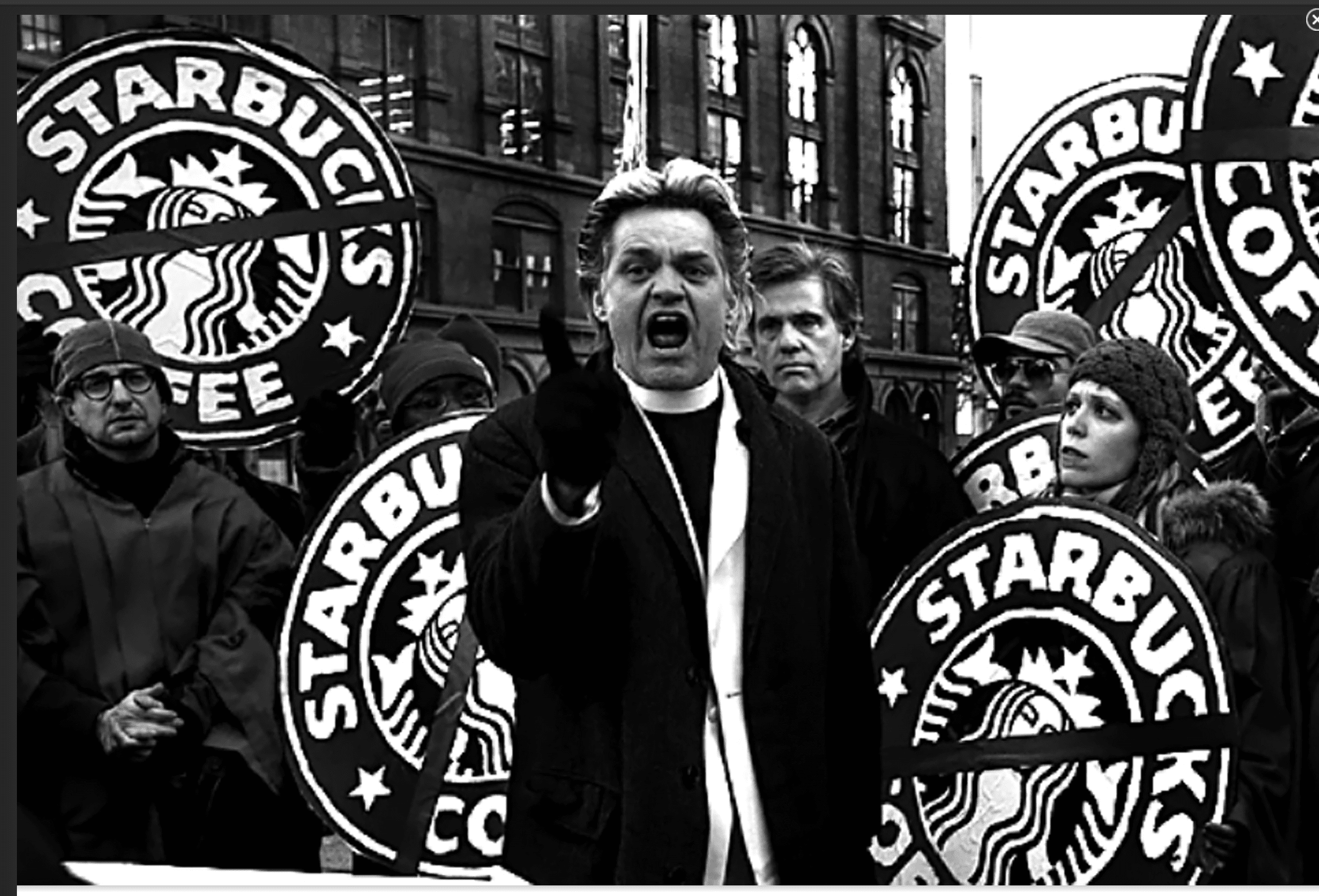 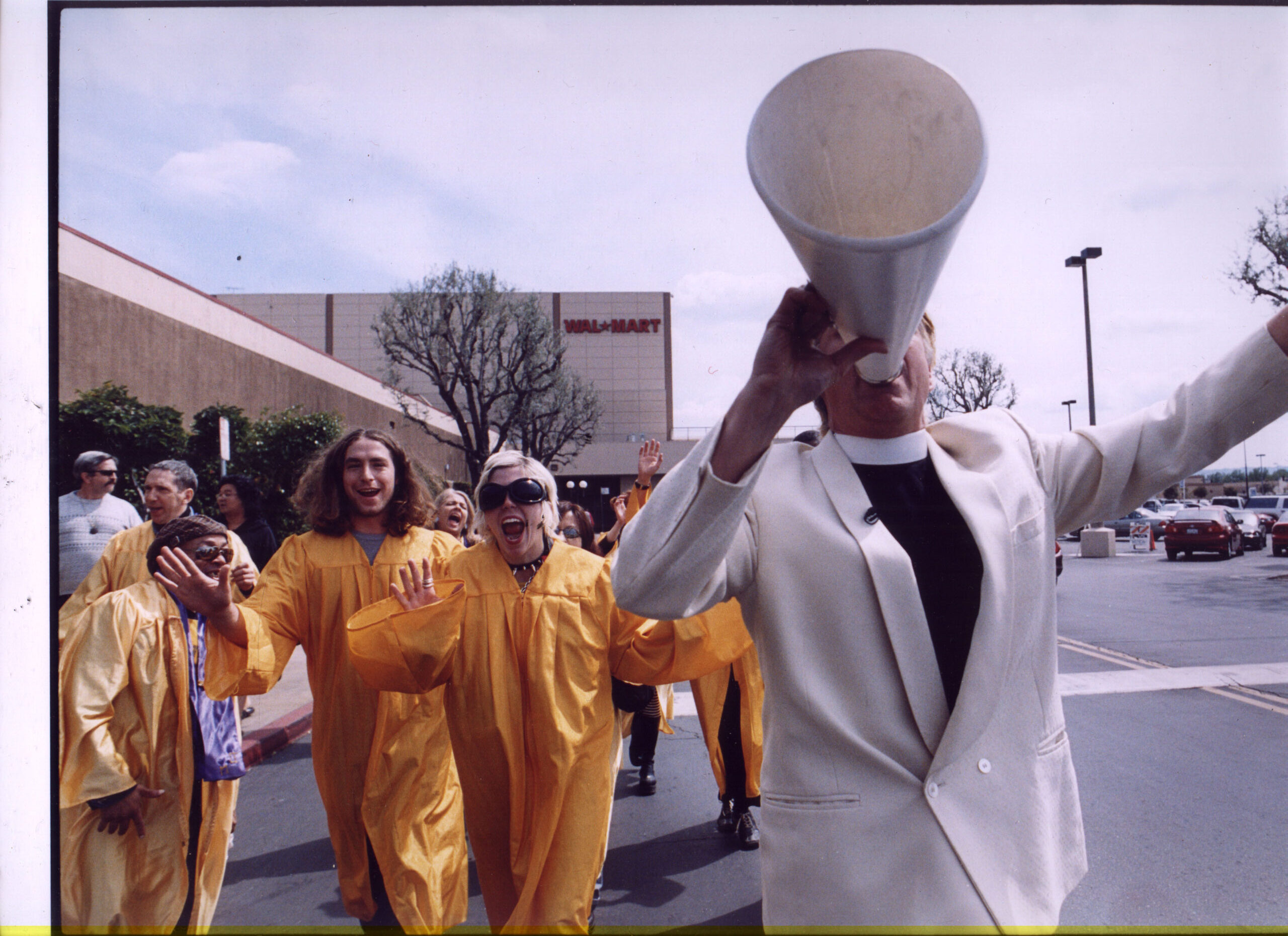 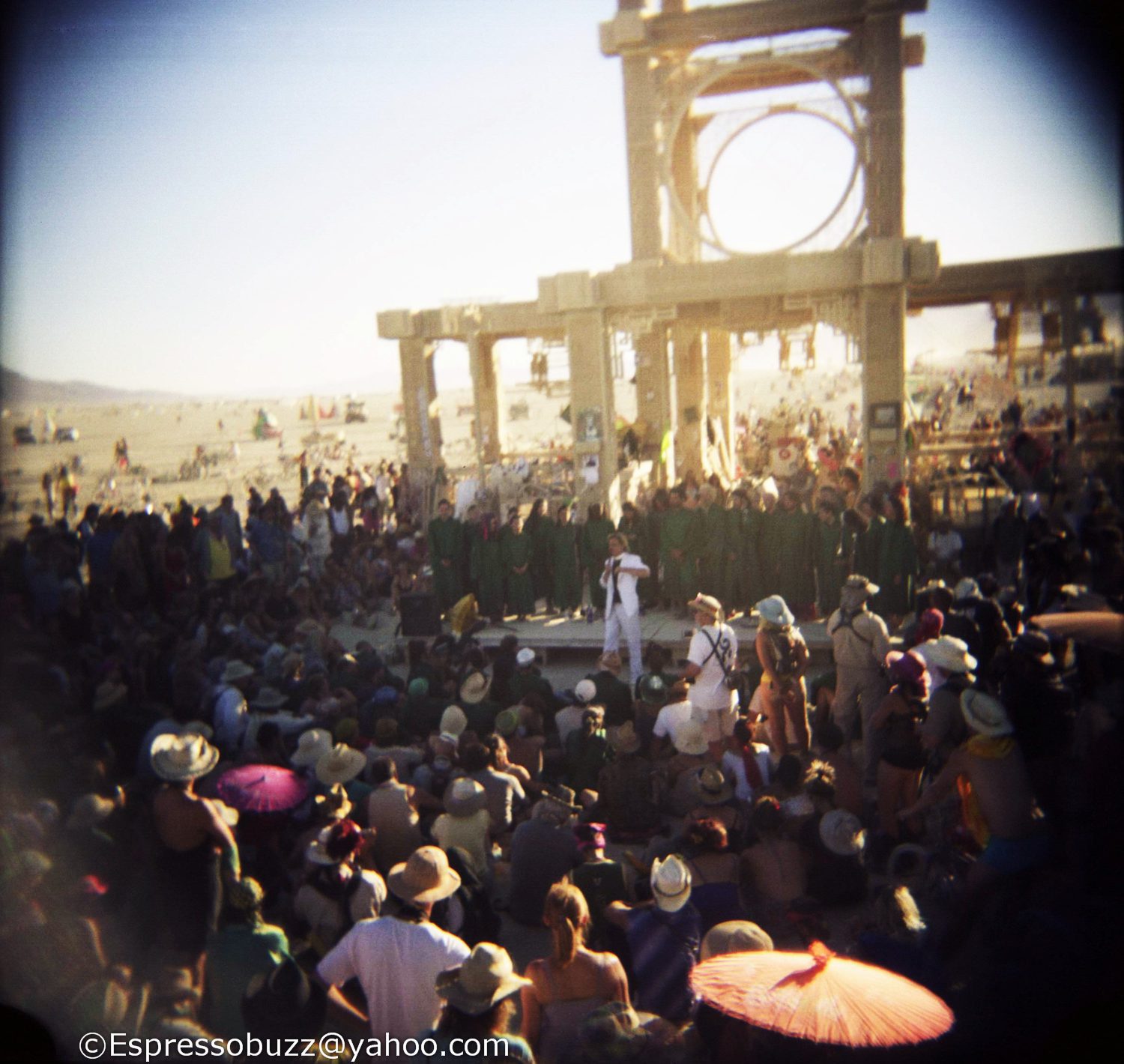 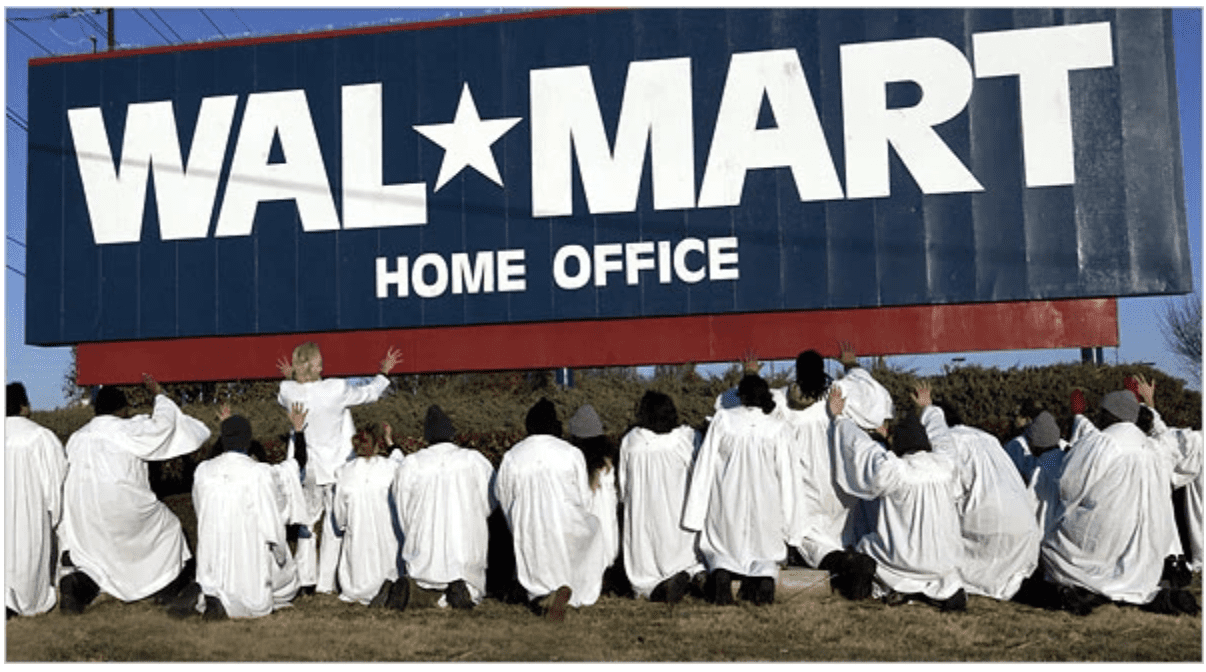 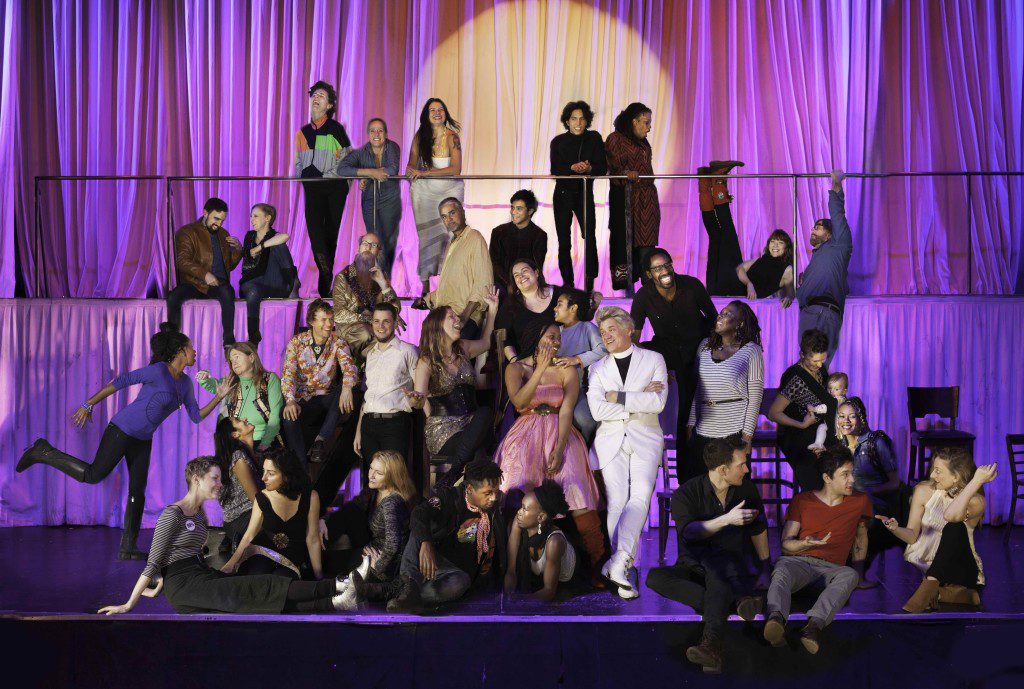 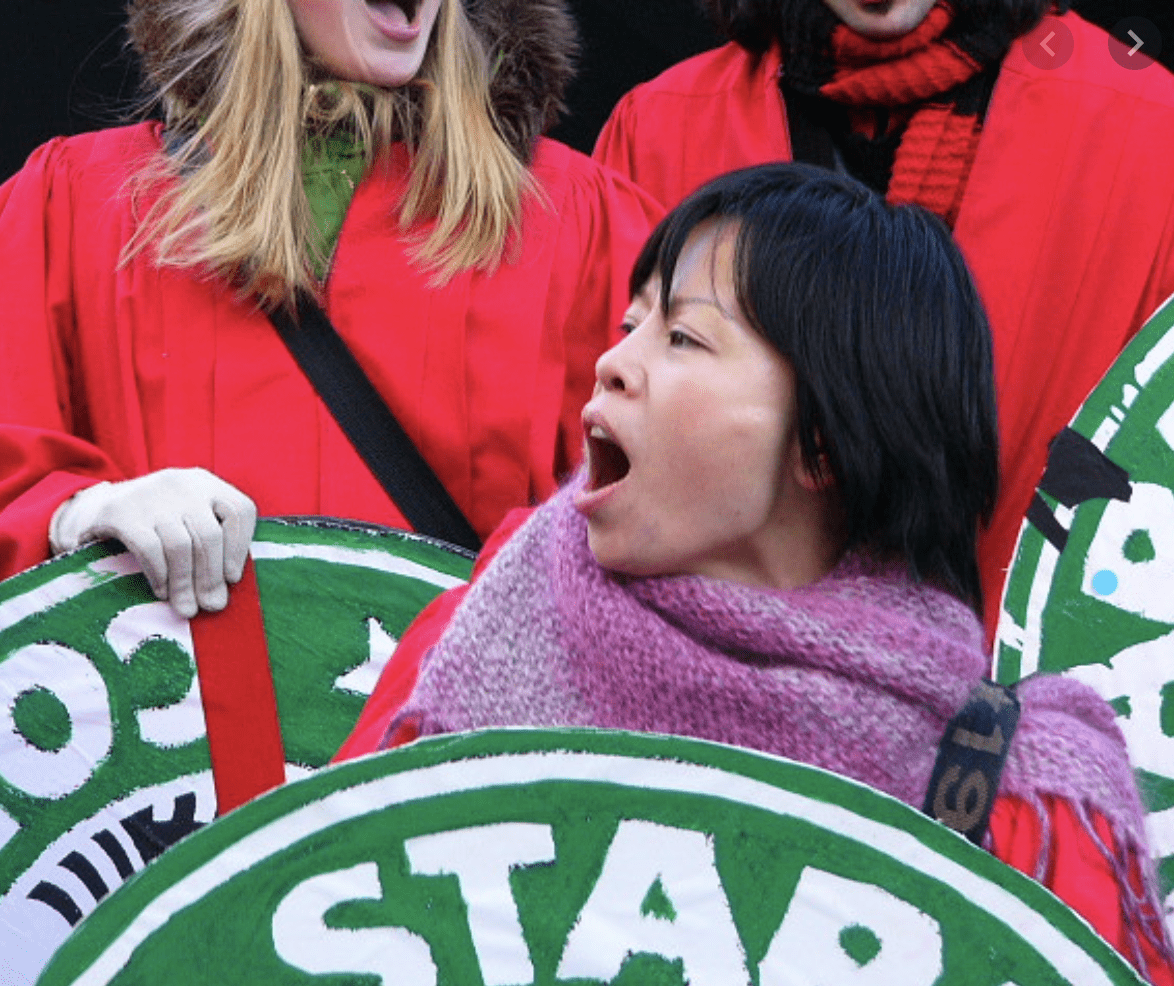